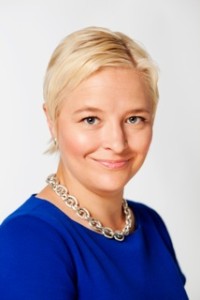 Libera’s Guest of the Week Piia-Noora Kauppi is the Managing Director of the Federation of Finnish Financial Services. Alongside her main work she also maintains a presence on the boards of UPM Kymmene PLC and Sulava Ltd. Before her current duties, Kauppi was an MEP for nearly ten years and the spokesperson of the National Coalition party European Parliament group. By training, Kauppi is a lawyer and she has also studied commercial science in Finland and in other countries. Kauppi is married and has three children. At the moment, the family lives in Tuusula.

“Our greatest challenge is the welfare model based on a projection of growth and a favourable age structure, which contains an unfounded degree of optimism with regard to granting promises about public services and pensions. Our growth forecasts are weak and we will largely live from hand to mouth. Only in a legally decreed work pension system is there a significant level of buffer financing. Elsewhere in social and health services, financing is done through taxes or debts. Our challenges are not so much the promissory note debts of municipalities and the state, but the future expenses incurred through the service promises made by the public economy (the service responsibility debt). The additional resources created by growth will not, even in the most optimistic of scenarios, suffice to cover the added costs resulting from an ageing population without structural measures being taken.”

“Although our economy is, on the public side, in deficit and in the grip of a durability gap, a significant number of private economies are getting wealthier all the time. Private wealth will in time become additional funding for our children. Becoming prosperous provides the possibility of developing the funding partnership between society and citizens in welfare services – particularly services for the aged. A part of the property of an aged person could be used to serve as purchase power for services. Citizens have to have a possibility to prepare for a long life through saving, acquiring insurance and making use of their assets and fund the services for the aged that supplement their other public services, such as the strongly growing care services. People should be allowed to have a right to the choices that suit their own life situation.”

What would you change at once?

“I would create a unified service voucher or account model for the municipal services that would cover all of Finland, under which a citizen would have purchase power in line with what providing the service through taxation costs the municipality. In addition, I would give people the possibility to voluntarily top up this purchase power with their own funds.”